Character Ethic is the Foundation for Success 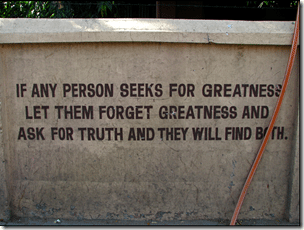 “What we do flows from who we are.” — Paul Vitale

You can fake it till you make it.  But make sure you do the work along the way to build a strong foundation to support your primary greatness.

Greatness starts from the inside out.

If you want to reap the benefits of greatness, you need to sow the seeds.  You build your primary greatness by building your character ethic.

Stephen Covey shares the keys to primary greatness in his book, The 7 Habits of Highly Effective People.

Character Ethic as the Foundation for Success

According to Covey, recent success literature focuses too much on personality ethic, and not enough on character ethic, and a firm foundation.  Covey writes:

“In stark contrast, almost all the literature in the first 150 years or so focused on what could be called the Character Ethic as the foundation for success — things like integrity, humility, fidelity, temperance, courage, justice, patience, industry, simplicity, modesty, and the Golden Rule. … The Character ethic taught that there are basic principles of effective living, and that people can only experience true success and enduring happiness as they learn and integrate these principles into their basic character.”

Build Your Foundation for Primary Greatness

So the seeds of your foundation for greatness.  Covey writes:

“I am not suggesting that elements of the Personality Ethic — personality growth, communication skill training, and education in the field of influence strategies and positive thinking  — are not beneficial, in fact sometimes essential for success.  I believe they are.  But these are secondary, not primary traits.  Perhaps, in utilizing our human capacity to build on the foundation of generations before us, we have inadvertently become so focused on our own building that we have forgotten the foundation that holds it up; or in reaping for so long where we have not sown, perhaps we have forgotten the need to sow.”

If There’s No Trust, It Doesn’t Matter

“If I try to use human influence strategies and tactics of how to get other people to do what I want, to work better, to be more motivation, to like me and each other — while my character is fundamentally flawed, marked by duplicity and insincerity — then, in the long run, I cannot be successful.  My duplicity will breed distrust, and everything I do — even using so-called good human relations techniques — will be perceived as manipulative.  It simply makes no difference how good the rhetoric is or even how good the intentions are; if there is little or not trust, there is no foundation for permanent success.  Only basic goodness gives life to technique.”

Sacrifice is the Price of Success

And, it’s the key to mastery.  Covey writes:

“To focus on technique is like cramming your way through school.  You sometimes get by, perhaps even get good grades, but if you don’t pay the price day in and day you, you never achieve true mastery of the subjects you study or develop an educated mind.”

You Can’t Reap What You Don’t’ Sow

At least, not in the long run.  In other words, you can’t trick or technique your way to primary greatness. Covey writes:

“This principles is also true, ultimately in human behavior, in human relationships.  They, too, are natural systems based on the law of the harvest.  In the short run, in an artificial social system such as school, you may be able to get by if you learn how to manipulate the man-made rules, to ‘play the game.’  In most one-shot or short-lived human interactions, you can use the Personality Ethic to get by and to make favorable impressions through charm and skill and pretending to be interested in other people’s hobbies.  You can pick up quick, easy techniques that may work in short-term situations.  But secondary traits alone have no permanent worth in long-term relationships.  Eventually, if there isn’t deep integrity and fundamental character strength, the challenges of life will cause true motives to surface and human relationship failure will replace short-term success.”

Who You Are Speaks Louder than Words

“Many people with secondary greatness — that is, social recognition for their talents — lack primary greatness or goodness in their character.  Sooner or later, you’ll see this in every long-term relationship they have, whether it is with a business associate, a spouse, a friend, or a teenage child going through an identity crisis.  It is character that communicates most eloquently.  As Emerson once put it, ‘What you are shouts so loudly in my ears I cannot hear what you say.’

There are, of course, situations where people have character strength but they lack communication skills, and that undoubtedly affects the quality of relationships as well.  But the effects are still secondary.  In the last analysis, what we are communicates far more eloquently than anything we say or do.  We all know it.  There are people we trust absolutely because we know their character.  Whether they’re eloquent or not, whether they have the humans techniques or not, we trust them, and we work successfully with them.

In the words of William George Jordan, ‘Into the hands of every individual is given a marvelous power for good or evil — the silent, unconscious, unseen influence of his life.  This is simply the constant radiation of what many really is, not what he pretends to be.’”

Greatness shines through, and it’s an inside job.

3 Steps to Crush Your Overwhelming List of Things To Do
Next Post:To Grow, Stay Uncomfortable